I know I have used this GIF in a previous post but it shows the mystical wonder that is Benedict Cumberbatch and will possibly be shown each time I am about to mention him in a post. You have been warned.

If you haven’t heard of the fabulous name of Sherlock Holmes, then welcome to the world, you must have been born yesterday.

This July is Well Did You Evah’s Sherlock time, as when looking for things to write about- we have these, “Meetings,” usually over cake and hot chocolate- something appeared that July is about the time Sir Arthur Conan Doyle created the character Sherlock Holmes. Due to the amount of characterisations/movies/TV series that are out there we decided to go all detective and look further into the character, who has been portrayed in many styles and ways, so, put your detective hat on,  grab a smoking pipe- not for smoking unless you actually do smoke one- possibly get a magnifying glass. If your a fan of BBC’s Sherlock, possibly put on a few nicotine patches… I will say although it is a Sherlock Holmes thing, leave the cocaine out of your system. 1887, which is when Sherlock Holmes was first publicised, cocaine wasn’t a drug that could get you into trouble today it possibly is.

Arthur Conan Doyle created the worlds first and only, “Consulting detective,” meaning Sherlock works with the police, often picking up on cases what interest him. Together Sherlock and his companion-  Watson- go off to solve crimes. But Sherlock’s mind can never seem to be turned off, like some people they leave their work at work. Sherlock never really leaves his work behind continuously he is deducting even the smallest things. In fact his use for cocaine in the novels is so his mind can keep motivated when he isn’t using it. On screen and in books one of the most important aspects of Sherlock’s characters is his high levels of observation and intelligence forming his deduction talents, which overall, form the character that is Sherlock Holmes.  Another thing seen onscreen and in the books is Sherlock’s fighting skills. Sherlock is also trained in many martial arts giving the upper hand, especially when it comes to fighting in Victorian England. 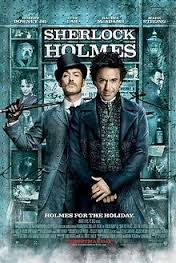 Conan Doyle has created this magnificent character, who you want desperately to be real, due to the intelligence and also the detail the author goes into about this character. In recent days the want for Sherlock to be real comes from the modern day screen versions, where Sherlock is portrayed by some of the media industries, “Screen Gods,” Robert Downey Jr, Benedict Cumberbatch and Jonny Lee Miller. The modern day Sherlocks each tell a different story, Robert Downey

portrays a Sherlock in the traditional Victorian London setting

, showing the original roots. Benedict Cumberbatch shows Sherlock in a 21st century London and Jonny Lee Miller probably has the more different portrayal of Sherlock having to play Sherlock in 21st century America, also there is a female Watson! Played by the awesome Lucy Liu. There seems to be a Sherlock for any taste, in this age especially for women as each of these actors have girly giggle and plan your fantasy wedding with them looks- I have no idea if any of the actors mentioned are involved or married but hey thinking isn’t illegal.

Ok, so the first Sherlock didn’t come to screen this century. The more traditional Sherlock that stuck to the character seen in the book have been on screen ages. We have seen Christopher Lee- Yes, Dracula has been Sherlock Holmes… investigation to see if Sherlock Holmes is actually a vampire, will begin shortly- considering Jonny Lee Miller has also played in the Tim Burton adaption of, “Dark Shadows,”= Vampire themed movie.

There could be something…   Other onscreen Sherlocks have been portrayed by Basil Rathbone and Peter Cushing. In fact loads have taken up the role of Sherlock as Conan Doyle has created this character and world that easily fascinates people. Sherlock solves crimes just by using deduction, the quote, “When you have eliminated the impossible ,whatever remains, however improbable, must be the truth.” Is famous even today even though in the world of forensic science the improbable would hardly stand up in court.

The villain in Sherlock Holmes, the novels, of course differs from book to book. Crime novels you often have someone- the bad person- who has committed the crime. In the world of Sherlock Holmes, especially the BBC’s Sherlock, there is an air of separation, the version created by Doctor Who writer- Steven Moffatt- shows a Sherlock who solves these crimes just for the fun of it and there isn’t much connection between Sherlock and the real world, which puts more importance on Watson.   A villain does soon arise and turns out to be an equal to Sherlock. Moriarty. Although Moriarty only appeared in two of the novels, recently Moriarty has

been brought forward as Sherlock’s enemy and also equal intelligence and is seen to kill Sherlock off- which is the reason Conan Doyle created the evil mastermind.

Overall, there is a lot to write about the Sherlock Holmes world. From the areas surrounding it to the things that have been influenced by it, such as amazing actor Hugh Laurie and his portrayal of House. The character of Gregory House is said to have taken some influence from Sherlock.