I hardly swear. In fact I hate swearing but it’s times like these where I feel like I am totally f*cked in the head.

Another thing I hardly do is admit I am human. It might be a delusion or a product of my messed up mind but I’m not sure what I am.

I’m an asexual, agender, dyslexic, dyspraxic, possibly now gluten intolerant, bipolar, goth girl who doesn’t understand anything what this world does or says.

I’ve never felt like I am human because I’ve never belonged anywhere. I’m waiting for that day where someone finds me and tells me they are taking me back home. People think I’m joking when i say, “I’m looking for Narnia.” Every so often though. I’m not. A place where the trees and animals talk actually seems to make a more sense than this world sometimes.

I must be missing something people have that blocks out all the insanity of this world.

I’ve been accused of being selfish a lot growing up but looking at the big picture, too many people put money, politics and their own selfish needs before everything else.

Is it just me who sees that the important thing in this whole world should be the fact that we are alive and strive to live in a happy world?

Maybe there is a reason I have mental health issues because what I’ve seen of this world I’m not sure how the population got this far in the first place. The Manic state of my bipolar is actually a blessing, it drops me into a world which makes this one seem like a super happy musical. Every other emotion though makes me want to run away, the self harming and over doses aren’t me trying to kill myself it’s me trying to figure out if this is real or not and find an escape route.

I have an annoying habit of reactively trying to find the positive in everything. It’s getting to the point now where it is tiring when you live in a world what just throws a lot of crap at you. I feel like dropping off the face of the earth just to see if anyone in my life would notice I was missing.

I like to think I have a close group of friends but my time watching people I’m starting to think they are just coping with me because I am the one who latched onto them. In the end though because I latched onto them I’m the one who will keep running back to them, although I start to feel like they are purposely trying to inch away. I always have keep that bit of distance between me and them so ok they can hurt me but they can’t tear me apart. I notice some make arrangements and I wasn’t there it hurts to be lift out hence that distance is needed because they will change and grow up but that’s one of the things I’m not sure I am able to do.  know if I let people crawl further in I’ll be back to that state were I get ripped to pieces again and only held together by an auditory hallucination

I’ve always been treated differently a 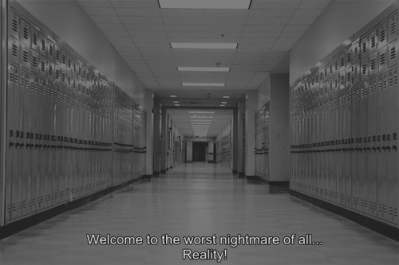 nd it wasn’t really because of the obvious fashion choices.

I grew up in my own world because from an early age I overall have been alone. Not a lot of people really know but I spent a lot of the first 10-ish years of my life in hospital, but even if it wasn’t for those days off from school I have a feeling I’d still have gotten treated differently. No one in my class understood me I’ve never acted my age no matter how many times I got told to grow up. My personality ranged from being immature in front of hospital staff to being middle aged when it came to being in front of teachers. My personality has never fitted in to cope with those of my age in the schools I have been to and certain characteristics of mine definitely didn’t help with the fitting in process.

Or maybe I give off some weird signal that keeps people away, I think that’s why I identify being a vampire, they are humanoid in stories such as Dracula they have no obvious power but blend into the darkness but also humans see them as dangerous. In some ways as well I’m stuck age wise, everyone seems to be able to change and grow up. I’ve noticed I have changed, well actually it’s more of I’ve become more confident, but growing up emotionally, I’m stuck at that age where everything doesn’t make sense.