Another government idea and it’s to do with Mental Health!!

Let’s get those earning (employment support allowance) ESA back into work!

Ok, at the moment this is just apparently in it’s “Idea,” Stages, but as someone earning ESA for mental health issues. I’m really questioning if the people who have come up with this have really thought it through.

For those who don’t know or need this explaining, here in the UK there are two main benefits for the unemployed.

Jobseekers Allowance – those who are, “Supposedly,” active and looking for work- although many people will argue they aren’t looking for work, these people get about £50 a week but lots of them have to follow rules such as show evidence they are looking for work. The trick is though, the evidence needed is just writing some nonsense on a piece of paper and showing it to an advisor every 2 weeks when you go for your money (or that was the trick in my local job centre when I went)

ESA- these people are classed as, “Too sick,” to work, it can be for physical or mental illness but you do need a doctor to agree that you are too sick, you get a sick note and the government do a lot of blah de blah sorting stuff.

One thing I find annoying is this idea is taking some people who it is said can’t work and putting them in an environment they might not be ready for but ignoring these people who are signing up for Jobseekers and supposedly want to work.

The main mental illnesses the government want to target are Anxiety and Depression….

I’d love to see the overall plan for this because I’m sure someone in the government has this idea in their head that, people with mental illness just need one therapy session then they’ll be completely mentally healthy

It can take years for therapy to work. Even if you have “Caught the illness in an early stage.” (anyone else think that makes it sound like cancer?) it doesn’t mean throwing them into work is the right decision.

Reality, it took me 3 years of therapy to realise I wasn’t healthy enough to work.

-If people aren’t ready to talk, that may end up being therapy wasted,

Will the government punish the person (take the money off of them) if they don’t comply with the therapy?

-If the therapy time is too short, this could leave a person worse- think of it you’ve just brought up memories you’ve hidden for a long time or just had the confidence to talk about them then that, “Support” Which was there and you could talk to is gone, then you are expected to go into a stress of a job.

Sure, there are times where I think, “Oh I could work,” However, I’m sure many mental health patients will agree with this, what you think one day can be completely different to what you think the next. Because I know that thought of, “I could work.” Is just a one day thing- also a manic thing because me saying I can work is often referring to impossible jobs such as being Wonder Woman.

My conditions would mean me keeping a job would be hard as I’ll be swinging off the roof and being reckless one moment and if they don’t fire me around that point there is a chance I’d be on the roof threatening to jump the next.

As they are targeting anxiety-

Imagine waking up, you need to go to work, your gut feels like it’s twisted and the thought that something bad is going to happen won’t leave your head. 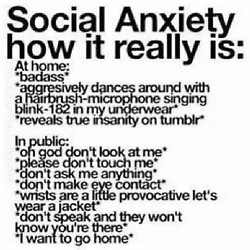 The idea of Fight or flight  is running through you, you want to run and hide from the world but at the same time you feel as if you are in a battle waiting for someone to pounce out and attack you. Although a therapist has told you nothing will happen to you, you still have the urge to cower under the duvet, while your body is waiting for an attack.

Somehow you do manage to get up and dressed- although you may not look your best as you were rushed to get dressed- the idea something bad will happen soon turns into the thought that everyone is looking at you and laughing at you. Throughout the day you are constantly plagued by paranoid thoughts, you avoid everyone (which is a problem in most jobs)

This continues, even worsens throughout the day. This is just one of the many things a person with anxiety could feel.

I don’t think the government see that most of these people with Mental Illness on ESA might be on it for a reason.

Anxiety isn’t just that the person is feeling scared.

If some people want to go back to work, I say go for it, but I think if the government want to see about saving money they should look into the people who can work first.

With ESA (especially with this idea) there are two groups people can be placed into. One of the groups I was actually terrified I’d be placed into, the “Work-Related group,” Involves regular interviews which if you don’t turn up to they can defer your benefit  and you can only be in this group for a year before you go into work or back on job seekers.

My anxiety levels actually dropped when I found I had been put into the, “Support group.” where you don’t have to go to those interviews.

This new idea apparently people will have to go through an interview.

Dear person who came up with this idea. Telling someone with anxiety that they have to go for an interview, which could effect their life, really not a good idea. Signed anxiety patient.

With this idea, I’m not sure if the government realise how much money they will need to put into therapy, apparently there are 260,000 people on ESA for mental health issues. Now, add the wage of a therapist, the amount of time they will need to put in, there may also be the need for a support scheme, someone the person could contact for support if they feel like they are having issues looking for work or in work, there are lots of things to factor in.

I’m sort of hoping this idea doesn’t become official as, I know loads of people who will be effected by it. I’m all for equality with mental health but at their own timings.