I have a confession. I have a soft spot for My Little Pony: Friendship is magic. My soft spot is that soft that I buy every cover of the comics every month. Yes. EVERY. SINGLE. COVER. My collection looks fabulous by the way. I have toys of MLP:FiM. I have a t-shirt. My birthday money will probably go on the £75 comic they have on the wall at Forbidden Planet. I’m starting to sound obsessed, which I’m not. It’s just a soft spot.

I love how My Little Pony has been brought up to date and the art work is so modern people really can’t hate it. I’m the first to admit that the My Little Pony of yesteryear used to scare the crap out of me. They were so proper and caring and lovey dovey that they made you actually not want a unicorn or pegasus for 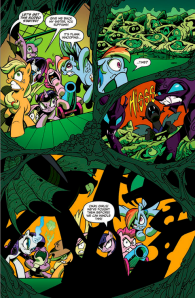 christmas. Friendship is Magic manages to be caring but in a cool way. You see Twilight Sparkle, Rainbow Dash, Pinkie Pie, Rarity, Fluttershy and Apple Jack face their problems as a united front yet still remain their own individual pony.

The comics are excellent in showing a family dynamic and reminding us there is more ponies in Equestria than the main 6. I don’t really want to give much away… The storyline is a fantastic way to get into the series of you’ve never seen the TV shows. The artwork is exactly the same and you really begin to pick up on every personality through the drawings and stories. The comics are funny, sometimes subtly sometimes outright. These variations make adults feel better about reading them. Like all friendships there’s a big fall out which gets reconciled in true My Little Pony fashion.

Incase you’re not as into the series has I am here’s a quick rundown on our favourite ponies: 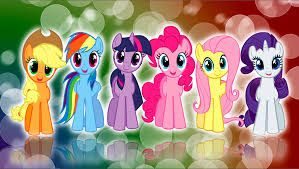 Twilight Sparkle: A purple unicorn. Very smart and seems to be the leader of the gang. She studies under Princess Celestia (ruler of Equestria, duh) and is most likely to use logic and books to get them all out of danger. She has a very cute dragon sidekick called Spike who has a crush on Rarity.

Rainbow Dash: A blue pegasus with fabulous rainbow coloured mane and tail. She’s the tomboy of the group and is always ready to fly off to anyones rescue.

Rarity: The fashion conscious unicorn who believes looking good can solve any problem.

Fluttershy: The pastel coloured pegasus. Very quiet and shy but will do anything for her friends and to help others.

Apple Jack: An orange pony that always wears a cowboy hat. She has a Western twang to her voice and isn’t afraid of hard work or speaking her mind.

Oh and there’s the Cutie Mark Crusaders who are a big part of the comic series… See how cute they are?!

In volume 2 of the collected FiM series (which is out soon) we see some big changes happening which would test any human friendships never mind pony ones. There are cute scenes throughout but they are nothing like the older series. We still watch them fight for their beloved home and face up to their fears while being plagued by nightmares (and Nightmare Rarity.) The story, characters and artwork becomes a lot more darker than we’ve seen before but it all works out in the end.

If anything this new lease of life breathed into the My Little Pony world has really made My Little Pony: Friendship is Magic into something super special. They’ve grown up and have connected with the readers better than any one may have thought and I believe this is mainly down to the fantastic art work and the fact that it’s perfectly accessible for everyone. No more nightmares for us 80’s/90’s kids.

My Little Pony: Friendship is Magic comics are available from comic stores and online. There’s also a Micro Series that looks at one character per comic. Both series are monthly and well worth a read! The TV Series is awesome too.